Greetings of the day from Ghantoot Racing & Polo Club!

Hope this email finds you well.

I am writing to inform you about the H.H. President of UAE Polo Cup 2013 Press Conference, held today Wednesday, March 20th at 11:30am, Ghantoot Racing & Polo Club premises-Grand Stand, where we presented the teams, fixtures, playing modality of the tournament, Grand Final`s day schedule and our valuable partners to the press and public.

This is the thirteenth year in a row that the much anticipated Royal Signature tournament will be held under the auspicious patronage of H.H. Sheikh Falah Bin Zayed Al Nahyan - Chairman of Ghantoot Racing & Polo Club.

The qualification polo matches will take place between 25th of March to 5th of April. For more information kindly please view the attachments.

The ones interested in getting more photos taken today during the Press Conference I can send via  www.myairbridge.com based on your request a nice selection I have made.

At present, there are five sixteen-goal teams preparing to take part in the event.

We wish to participating teams best of success and luck!

Thank you very much in advance for your time and consideration. 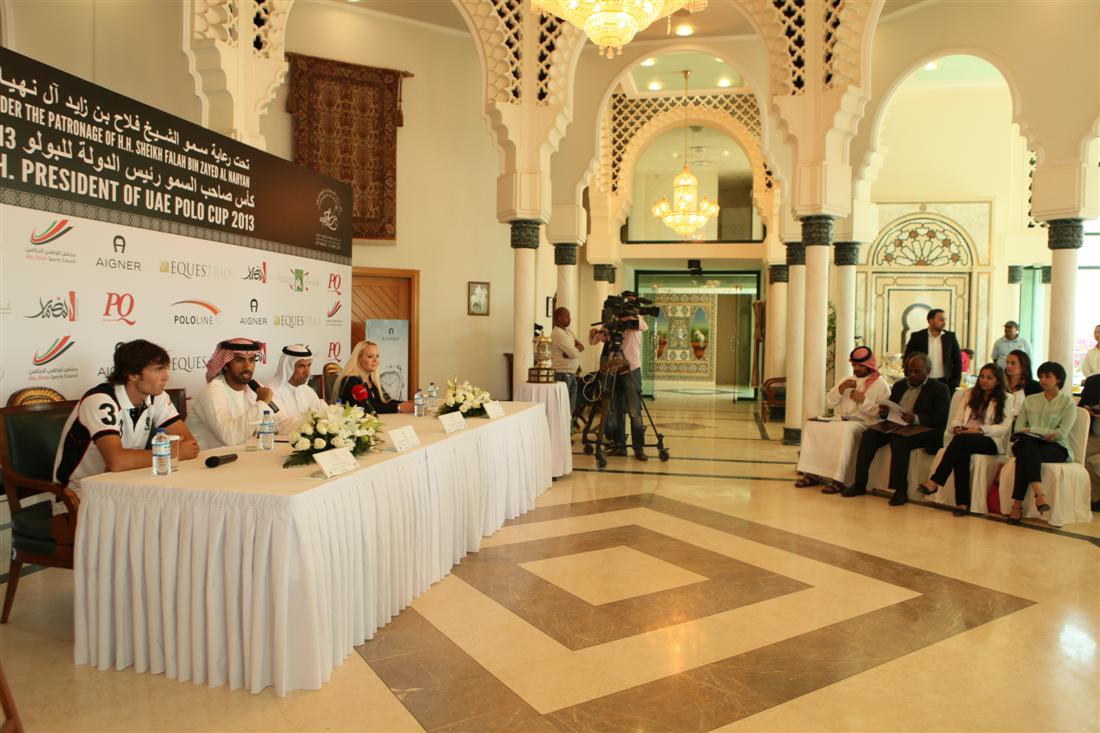 HH President of UAE Polo Cup, which is taking place for the 13th consecutive year under the auspicious patronage of HH Sheikh Falah bin Zayed Al Nahayan, Chairman of Ghantoot Racing and Polo Club, is considered to be one of the finest and most prestigious polo tournaments across the Middle East.

This event falls in line with the strategic sports objectives for Abu Dhabi Emirate, which seeks to elevate and promote the polo sport within and beyond the UAE, thus providing the opportunity for various teams and sports lovers to get acquainted and enjoy the highly technical skills of polo.

The teams that are participating in this tournament includes Ghantoot Polo Team—winner of the Golden Polo Cup that took place in Dubai recently—and Abu Dhabi Polo Team and Zaidan Polo Team—defending champion—in addition to Bin Drai Polo Team and Al Habtoor Polo Team, where the handicap of each of these teams reaches 16 and each team includes professional international polo players.

This tournament has attracted eight teams last year with an average rating of 16 handicap, and the winner of last year’s tournament was Zaidan Polo Team under the leadership of the Saudi player, Omar Zaidan.


Live Broadcast for the Final Match

Abu Dhabi Sports Channel is broadcasting live coverage of the final match and the award ceremony, providing the opportunity for millions of viewers to watch one of the finest polo matches in the Middle East and to share the enthusiasm and excitement.

The international “Polo Line” and “PQ Magazine” are covering the event due to the importance of this tournament in the polo world of this region.

Polo, Entertainment, and Surprises Waiting at the Finale

On the final day of the tournament, 5 April 2013, there will be two matches including the final, where Ghantoot Racing and Polo Club invites the public to enjoy the elite and exciting matches and the vast side entertainment for all ages during that festive day.

Picnic areas, activities and entertainment for children, and live concert and more await the public at the final day of the tournament; it is the ideal venue for adults and children to spend a special spring weekend day.

The clubs doors are open to public for free during the tournament days, including the final day on 5th of April, from 1:00pm.

We are welcoming you all!

PLEASE NOTE
If you use TRACKING
code in your stories
or use a 3rd party
newsletter service like
Mailchimp that uses it,
your tracking code
WILL BE DISABLED
by our ONSITE
PRIVACY SECURITY &
your Story's layout
may unfortunately
be affected.
---